We were deeply saddened to learn of the death of our Assistant Grand Master, Right Worshipful Brother Stephen Davison, who passed away on Wednesday, 20th April 2022. 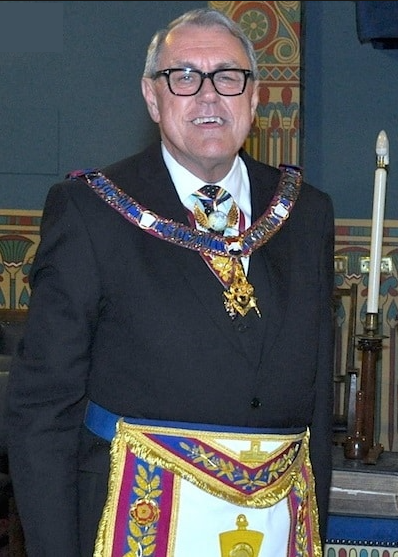 Undoubtedly, R.W.Bro. Steve was one of the nicest people anyone would wish to meet, and our thoughts and prayers go out to his family.

Everyone was very saddened to hear of the death of R.W.Bro. Stephen Davison, Assistant Grand Master on Tuesday, 19th April 2022, a  month short of his 70th birthday. He had appeared to be in good health earlier in the day but passed away peacefully at home that night.

A tall man, R.W.Bro. Steve was never aloof or considered himself superior, but was the epitome of a Mark Master Mason, meeting everyone on the level. Outwardly he was inevitably smiling, with a glint in his eye. He made sure everyone felt valued, and was so obviously enjoying Mark Masonry. As A.G.M., he visited Warwickshire on many occasions – meetings of Provincial Grand Lodge, four-provinces meetings, the Lodge of Instruction Festival and recently at Centenary and Sesquicentenary meetings.

Within Warwickshire, R.W.Bro. Steve was an Honorary Member of The Bedford Lodge of MMM No 115 and the Yenton and Central Keystone Lodges of MMM and RAM No 719.

Since becoming Assistant Grand Master, R.W.Bro. Steve often spoke of the “Magic of the Mark” and in his passing we have lost just a little of that magic.